WHAT'S THE SCOOP ON YOU, SLIM?

I'm just a tired man. Sick and tired of the perpetual filth and emptiness humanity has brought with it over it's thousands of years of evolving.
to think, that billions of years ago, something evolving out of primordial goop would breed such a hate-filled species of being such as "The Human"
Ecce Homo, consceleratus. Beings so cruel, yet so vain in their justification to their action that they will let the building burn and
still have the gall to cry about the tragedy of it.

I am also a simple beast. A mere animal. Powerless as much as the next person. Misanthropic? Perhaps. Angry? sure. Destructive? Only if it justifies the means.
A Hypocrite? Who isn't. My intent isn't to hurt people, bring misery to them. At least not in a sense that isn't justified. I'm not the one to kick down
doors. I'm not the one holding a knife to your throat. But i will definitely, absolutely, try and present to you a view of the world that will not be
comforting or serene. It's a cold place. And we are all standing outside. But some will rob, kill, rape and play you just because your coat happens to be
thicker than theirs.

FACE IT SUCKER, YOU'VE BEEN HAD. and they are all laughing at you. Myself included. I'm not above, nor below you. We are rubbing
shoulders, but you couldn't even tell. Years of lending out my hand has left it scarred and maimed. But yet, here I am yet again. To throw your sorry ass
another bone. don't be fooled, i still fucking hate you. But not as much as those bobblehead mascot puppets that oversee and control us. Control the media
we consume, the clothes we wear, the "counterculture" you think you are a part of, what coffeeshop is cooler; The one that has almond milk in their latté
or the one that uses pasturized wheat in their frappucino, The things you can or better yet, can not say. We are living in the most technologically
advanced age in human evolution. Yet, Our human instinct has dulled over years of breeding complacency putting too much trust into a handful of people that
when all is said and done, do not care about you in the slightest. we are all fools, but none of us are jesters. Victims of Non-linear warfare, Strategy of
Tension but gaslit into thinking all of these terrible things they do to us are in our best interest. "for your safety and mine" 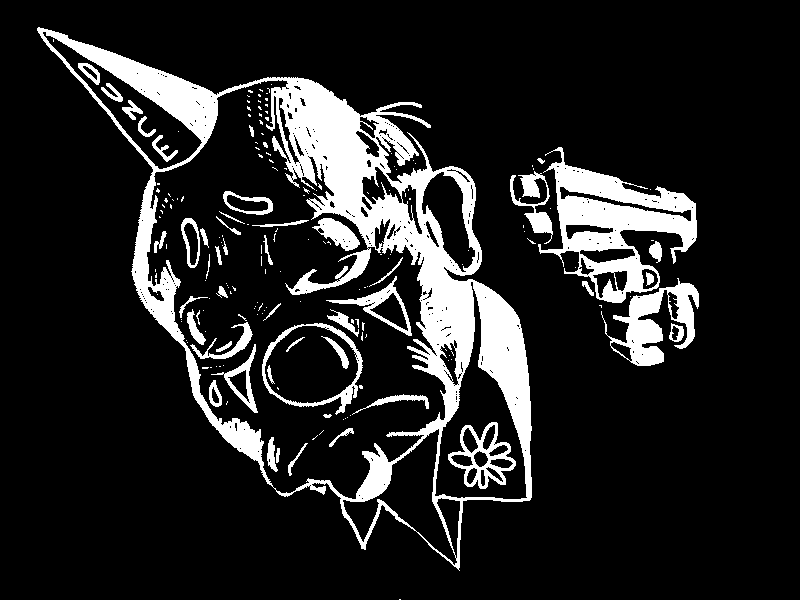 But hey, it aint all bad. At least, if you put some work in, and figure out that you have agency as a human being. You will be fine. Because if there is one
thing that those upper echelon clown monarchs hate is someone who can express themselves through any means available. The world need not devolve into acts of
constant violence*, As much as the human mind has fallen from grace, it gives me joy when there are still artists, musicians, writers, filmers, and troublemakers
out there. To bring us a smile in all of this misery. That's probably why people, myself included, are drawn to the arts. One of the last remaining freedoms.

*except; Pedophiles, dogfuckers, elites, feds & abusers as for they have forfeited their rights the moment they chose the way of degeneracy and suffering.